This is the second half of the article on ‘THE FIRST THIRTY YEARS’, written for the 1967/68 Year book. The second paragraph has already appeared on the site as part of the piece on Bobby Bridge, but we have retained it to keep the flow of the original.

A great deal of the club’s history is steeped in the deeds of its walkers, some of whom were great champions in their day.

The first, and probably the greatest of the club’s outstanding performers was R. Bridge.  Bobby Bridge as he was known, was a one-armed postman whose victories and titles could fill a booklet on their own.  Among his most notable triumphs were his A.A.A. titles.  He won the Two miles in 1911-12-13-14 and in 1919, and to add to these he won the Seven miles title in 1912, tied for first place with the celebrated H.V.L. Ross in 1913, won outright again in 1914.  Achieving the A.A.A.’s double three years in succession is an outstanding feat, and but for the war . . . . . who knows?  Bobby’s greatest day was probably the 2nd May, 1914, when at Stamford Bridge, London, he ‘re-wrote’ the British record book from 11 to 15 miles, and also set a world record by covering 15 miles 701 yards in two hours.  This was the same race in which the famous Edgar Houghton of Surrey W.C. set world record figures for twelve hours walking.  Even after his great years Bobby continued to race, but the loss of a leg in a motoring accident in the early 1930’s brought also a great loss to Race Walking.

During the years prior to the first world war, the tall long striding Jack Sutton was also at his peak, and he kept the club to the fore by scoring victories in the Northern Counties (as it was then) 20 miles championship, in 1913 and 1914.

After the war in 1919 activities were resumed, and following closely on the heels of Bobby Bridge, the Lancashire Walking Club produced several men who were to take the club successfully through the 1920’s.  J.Harrop and F.Smith soon made their presence felt in northern track and road sprint events, Smith actually winning the northern Seven track championship in 1923.  1923 was also the year that a new star appeared on the horizon in the person of Joseph Hopkins, undoubtedly one of the greatest  distance walkers the north has ever produced. 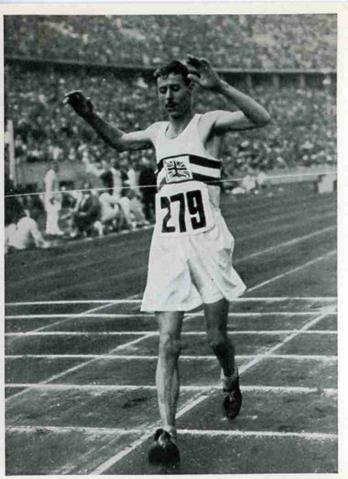 Joe Hopkins jumped into prominence by finishing third, behind National champion Fred Poynton, and F.Kersley in the 1923 Manchester to Blackpool Walk.  He started his walking career with the North Manchester Harriers, later transferring as a first claim member to the Lancashire Walking Club.  A real honest to goodness walker, Hopkins stayed in the top class of British distance walking for over a decade, winning classic after classic: the Bishop of Birmingham Cup, the Nottingham to Birmingham Walk in 1924, the Manchester to Blackpool Walk in 1926, the Liverpool to Manchester Walks in 1936/37 and the National 20 Miles in 1938.  To this one can add several northern titles as well.  Quite a record, but the race which lingered in many people’s minds was his torrid battle with Harold Whitlock of the Metropolitan W.C. in the 1936 National 50 kilometres.  The race held at Derby was eventually won by Whitlock, but he had to set a new championship record of 4 hours 30 minutes 38 seconds to do so.  Hopkins was also inside the old record less than half a minuted behind, in 4 hours 31 minutes 1 second.  Although second, this performance gained Joe selection for the 1936 Olympic Games in Berlin, where unfortunately he suffered from food poisoning and had to retire from the race.  Harold Whitlock went on to win easily, so one could assume that had Hopkins been one hundred percent  fit, he might well have come home with a medal.

Back to the 1920’s, and the club’s first Manchester to Blackpool Walk winner, Ralph Wallwork who accomplished the feat in 1921.  The club has provided only three winners in the event, and all in the space of seven years.  Arthur Hignet was the ‘third man’ in 1927.  Twenty seven races have been held since Arthur’s victory, and whilst several of our men have come close to winning, the Manchester to Blackpool Walk glory belongs to the men of the twenties.

After the mid-twenties honours of the distance men, the decade closed as it had started with the sprint men in prominence.  In 1928 J.Harop with the Northern Track Seven Miles title, and then along came another grand walker, Leslie Dickinson.  Hailing from the Cumberland fells where he had been handling trail hounds, he joined the club as a novice after taking up residence in Manchester in 1928. He showed a natural aptitude for the sport at once and in 1929 he finished third in the National ‘Junior’ 10 miles championship.  Dickinson virtually monopolised the Northern Two and Seven Miles track championship from that point until well into the thirties.

Much has already been said about the performances of the thirties but among those that haven’t are : George Birchall’s fine northern 50 kilometres victory in 1937 and Tommy Dunne’s National ‘Junior’ 10 miles win at Manchester in 1939.

So much for the first thirty years of the Lancashire Walking Club as recorded through the deeds of its star men – we owe them a great deal.  We owe even more to the many more members who backed up these champions, but who were never champions themselves.  The men without whose backing the many team victories scored by the club could not have been, (although the elusive national team title still eludes the club).*  We owe so much to the men behind the scenes, the officials and committees who through the years have ensured that walkers have been able to practice their sport.  Perhaps in the next Year Book we will be able to look at some of these stalwarts, as well as the second thirty years of the Club.

This then has been a brief history of how the Lancashire Walking Club started, and how efficiently its officials carried out their duties of fostering the sport with the County.  So good was their work that it had repercussions outside the red rose boundary, and it would be quite true to say that the whole northern walking fraternity owes much to the endeavours of those early enthusiasts.

* The elusive national team title was secured at the National 20 kilometres championship in 1970 at Crystal Palace.