George & I were determined not to let Pat Duncan achieve a hat trick of wins this year and so set off at a cracking pace going through 10 miles in 89 mins, Horwich (2h 34m) Chorley (3h 20m) and Preston Docks (5h 5m), We were doing ‘bit and bit’ – one of us leading the other for the length between lamp posts. 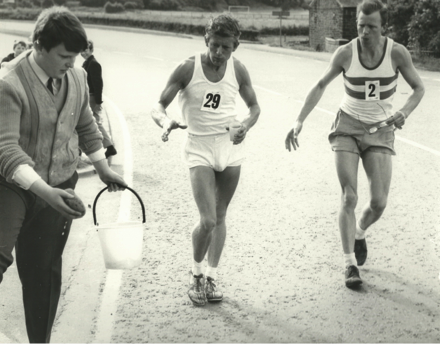 George and Guy in clear need of a sponge at Chorley

We stayed together to Lytham when George pulled away from and opened up a 3 minutes gap by the finish.

George preparing to surge to victory

Pat Duncan was still in third place at Preston but then his right leg swelled painfully as a result of an injury sustained earlier in the season. Pat struggled on to finish fourth in 8h 37m 51s being pipped for third place by Dennis Pook of Hinckley.

1970 [To my embarrassment, being the club secretary at the time and organiser of the race, the result did not appear in the Record, even after I submitted it belatedly – TT]

From the start, it was a battle between Karl Abolins and Paddy Rice, until halfway when Paddy Rice surged into the lead with a strong sustained burst for several miles in spite of the heavy rain. However, he faltered, allowing Karl to come back again for a comfortable win. I suffered from lack of drinks around Preston as my wife, who was looking after the Wakefield team was struggling to see to all our needs as were getting so spread out and the traffic was bad. Wakefield’s team was very weak on paper this year without Barras, Thorpe & Grayson but with me getting 3rd (8h.26.57), Eric Lee recording a PB in 4th
place (8.34.13), Lionel Munckton on his debut surprising everyone with 14th spot (8h 54m 0s) and Ray Manning taking 18th place (8h 58m 16s), we managed to retain the team title with 3 points to spare from Royal Sutton Coldfield.

Karl Abolins, a formidable competitor in the longer distances, winner of the Rouen 24 hours covering 205.160 kms.

Peter Markham was always at the front this year and was closely followed by Joe Toehill.

Peter Markham, Leicester through and through

I went through halfway in 4h 8m and caught Joe after Preston. He’d no-one looking after him so my wife, Judith naturally offered him drinks and food as she did me. Peter finished five minutes in front of us but as we were approaching the Town Hall, Joe’s wife was there screaming at him to ‘Drop him, Joe’.

Joe Toehill of the honourable dead-heat for second with Guy

We finished together and when we’d finished the couple had a few words. However, Joe said, that even if he could have done, there was no way he would have finished in front of me after the assistance Judith had given him.