Memories of Leicester and Lancashire 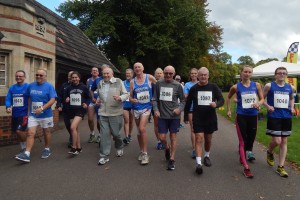 More by luck than accident, I was chuffed to find myself in the splendid grounds of Abbey Park for the celebration of Leicester Walking Club’s 90th anniversary, organised in conjunction with the Jim Sharlott 10k Open and BMAF 10k championships – very pleased too to find myself in the comforting company of Ron and Joan Wallwork, together with the Crompton clan.

Why you might well ask? Quite simply Leicester has a special place in my race walking heart. Back in 1962, May 19th to be exact, I raced outside Lancashire for the first time in the Leicester WC Schools Open, finishing 11th out of 75 starters. After the race Albert Johnson, possibly the club president at the time, took the trouble to write to my father, praising my style and urging me ‘to stick at it’.  A decade later, having finished third in 1970, I managed to win the prestigious Leicester 7 in 51:25, ahead of Mike Holmes, Geoff Toone and Brian Adams, a highlight of my extremely erratic career. Another decade later I was privileged to be a member of the Leicester Walking Club, whilst living and working in the city. In the event, I was the third scorer in the team that triumphed in the 1983 Leicester 7. Phil Vesty of the home club won easily breaking 50 minutes, whilst I finished 8th. However, this was another of my abortive comebacks as competing gave way to picketing and demonstrating with the onset of the Miners’ Strike.

Leave aside the distraction of my political leanings, the Leicester connection has a much wider significance in the history of our club. Participation in the race from 1958 onwards marks what might be properly called the beginning of the ‘Wallwork Years’.  Thus in this very year, Ron finished 15th in a sensational race, in which Stan Vickers and Ken Matthews obliterated Roland Hardy’s course record of 51:21, clocking 49:36 and 50:05 respectively. Two weeks later Ron came home 4th in the National Junior 5 miles. Backed up by our very own Fred Pearce and Bob Towell he led the club to third team national medals. A year later Ron, using seemingly the Leicester 7 as warm up, took 10th spot, before progressing to third place in the Junior 5. With Fred Pearce once again and Alan Hall in tow, Lancashire climbed to second place in the team race. 1960 saw Ron in subdued form at Leicester, only 17th far behind a rampant Ken Matthews, who set a course record of 48:25! Yet two weeks later Ron claimed the individual title in the National Junior 5 [17-21 years], although the team slipped out of the medals.

Proof though that the club was on the rise came in the following year’s National 10 miles held not far from Leicester in Loughborough. A team comprising Ron, Mick Jeffreys, Jack Sankey and John Todd came 2nd only five points adrift of Sheffield, causing the Race Walking Record to comment, ‘much the best performance ever shown by Lancashire in a race of this class’. 193 walkers and 22 teams closed in.

Much more on the ‘Wallwork Years’ in future posts.

Before leaving the realm of nostalgia it was moving to see so many Leicester faces from the past. For example, Geoff Toone, winner of the National Junior 5 in 1967, was in attendance, once one of the sport’s brightest prospects in his day and in retrospect endowed with a technique ahead of its time. In those times his rapid cadence was always likely to catch the judge’s eye. Perhaps his greatest performance came in a 10k track race at Saffron Lane, in which he clocked sub-44 minutes in beating a formidable Mexican trio, then a dominant force in our sport. Brian ‘Walk with Jesus’ Adams was also there, one of the sport’s great all-rounders. Despite outstanding performances at the shorter distances, finishing 11th in the 1976 Olympic 20 kilometres, my abiding memory is of his victory in the 1984 Leicester 100 miles. As it happened I was doing my best to support John Cannell, the formidable long-distance specialist from the Isle of Man, plying him with drinks, sponges and encouragement as you do.  And as the race unfolded we were sure Brian would crack. The word was that Brian hadn’t done more than 20 miles in training. Whether this was true or not he displayed real grit in the late stages to triumph in 17:39:28, about a mile in front of John. It was a pleasure too to bump into the ever-smiling Mal Blyth, who told a lovely tale, wherein he turned up to race the Vauxhall 7, eyed the field and thought, ‘ I’ve got a bloody good chance here.’ His hopes were dashed at the last minute by the belated arrival of our own Eric Crompton, who proceeded to take first place. Unfortunately, the first prize was not a new Vauxhall Viva. On the other hand….. 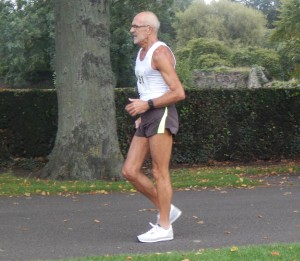 As to the 2017 Jim Sharlott race conditions were good, whilst seven judges prowled the well-surfaced 700 metres circuit. The star of the show was undoubtedly a majestic Francisco Reis. Unfortunately, Ian Richards, silver medallist in this year’s World Masters Games [M65], fell foul of the judges. Both Dave Crompton and I struggled, but I managed to take the M70 title. 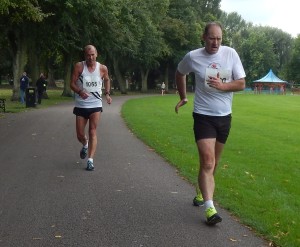 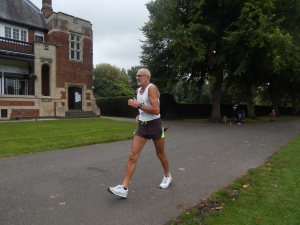 Thanks to Linda McDermot for the photos