Firstly to make you smile perchance Chris Bolton sends memories of some of our proud Centurions.

Bill qualified in the Chigwell 100 in 1961 in 22-28-30.  He attended the celebration dinner at the Mansion House to receive his award.  On the way home, probably after celebrating too much, he lost his certificate.  Several days later his mother opened the door to a policeman asking to see Bill.

He found Bill lying on the settee watching TV. He told Bill his certificate had been handed in at the station but he wanted to see just “what sort of a nutter would walk 100 miles”. Thereafter Bill always referred to the Centurions as the Nutters Club.

Eight years later in 1969 Bill, Alan Hudson and Alan Day took part in the Bristol 100. They walked together the whole way and I was their attendant.  I was knackered running after them and at ninety three miles Bill shouted for the sponge.  I soaked it in the bucket and ran after him: he stuck it down his shorts and mopped out his over heated tackle. As he returned the sponge Alan Hudson, 20 yards ahead, shouted “sponge”, the bucket was now 150 yards back down the road and I thought sod it, ran after Alan and gave him the sponge. He took it wiped round his face and took a big drink from it.  I never told him it had just been round Bill’s groskies.

They crossed the finishing line together in third place and with three to score were handed the team trophy as they finished.  I have always said that you don’t cry when you lose, you cry when you win and at that emotional moment there were a few less than dry eyes, including mine.

John qualified at Leicester in 1958 in 23-07-37.  John told me that at 85 miles he was ready to retire but his attendant poured Sloan’s Liniment, a lethal remedy, down his legs and put his track bottoms on.  He said he shot to the finish and then started running.

I qualified at Leicester in 1962 in 22-9-27.  After my fourth place in the Blackpool Walk the previous Saturday I must have had feelings of grandeur and set off at 6mph passing 10 miles in 1-40-05, just a minute behind Frank O’Reilly. I’ll never know what prompted this act of suicide.  I’ve never been a night hawk and approaching midnight I couldn’t keep my eyes open and persuaded Bill Cowley and Bert Butterworth , my attendants, to let me have a sleep.  After twenty minutes sleep at the side of the road I had recovered and was back on the road.  At 65 miles there was a breakfast stop for the attendants and Bill told me that Bert ordered a full English and when he had finished ordered another – and then another.  Bert had a prodigious appetite and after walking four days at 55 kms each day in Nijmegan he finished weighing more than when he started.  At 80 miles Bill ran out with a big smile on his face to tell me that Frank OReilly had won and was now in the bath.  With twenty miles to go I was not amused.

John, of Wakefield Harriers, qualified in the 24 hour track walk at Leicester in 1969.  He walked well for 70 miles and then suffered badly.  Guy Goodair and I were his attendants and at one stage he took twenty minutes for one 440 yard lap.  He passed 100 miles in 23-19-52 and he wanted to retire but Guy insisted that he do one more lap in case the lap counters had made a mistake.  We then carried him into the changing room and laid him out.  After 35 minutes Guy took me to one side and whispered that somehow we had to get him back onto the track.  Guy was a grade one pot hunter and had realised that there were two awards, one at 100 miles and one at 24 hours. John didn’t want to know but despite his protests we carried him to the track and held him upright at the spot where he had retired. With ten seconds to the twenty four hours we released him and he staggered another five yards.  Sadly the Centurions handbook doesn’t recognise this achievement.

At the same event John Eddershaw C299 was competing.  At 6-00 am I asked him if he needed anything.  Yes, he said, get me an ice cream.  I managed to find a newsagents with a freezer open at that unearthly hour and got John his ice cream.  I don’t think he ever realised the problem he caused and of course I wouldn’t tell him.

Secondly the photograph of Chris, Frank and John in the 1959 Bradford 7 is taken from a wonderful collection of photos given to Roy Gunnett by Harold Ogden. I’m in the process of scanning them for use on the web site. There are some gems from the past. I’m also trying to find out more about Harold himself. Any information gratefully received.

Finally it would be remiss not to draw your attention to the sad loss of another leading race walker from the period described as the Golden Era by Ron Wallwork, namely Peter Fullager.

His great friend and leading historian of our sport, Tim Erickson has produced a special edition of the Victoria Race walking Club newsletter, marking a sad farewell to UK and Australian racewalking representative Peter Fullager. Peter, who had lived in Adelaide since emigrating to Australia in 1970, died in the early hours of Wednesday morning, December 23rd after a battle with cancer.

Tim remarks, “we remember Peter as a consummate competitor, as tough as nails, with a relentless surging action that left most walkers in his wake”. 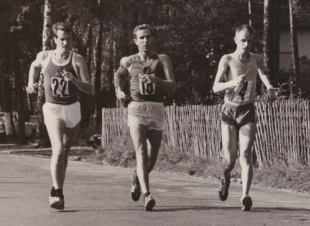 Result of the above 20 kilometres Lugano Trophy final

Our own Greg Smith was Basildon AC’s club secretary when Peter joined in 1968, having left Surrey WC. Greg comments, “Peter was deadly serious about race walking, a fearsome model of commitment and rationality in training. I tried, I think unsuccessfully, to get his track 30km and 20 miles times from 1967 accepted as UK records. In the end he’d had enough of the nonsense of English officialdom and went to Australia”.

Tim Erickson’s tribute is a fascinating, revealing and moving portrait of an outstanding and fiercely independent athlete. It is to be found in a special edition of the VRWC December newsletter – see link below.

3 Responses to Post-Xmas Reminiscences – both amusing and deeply sad