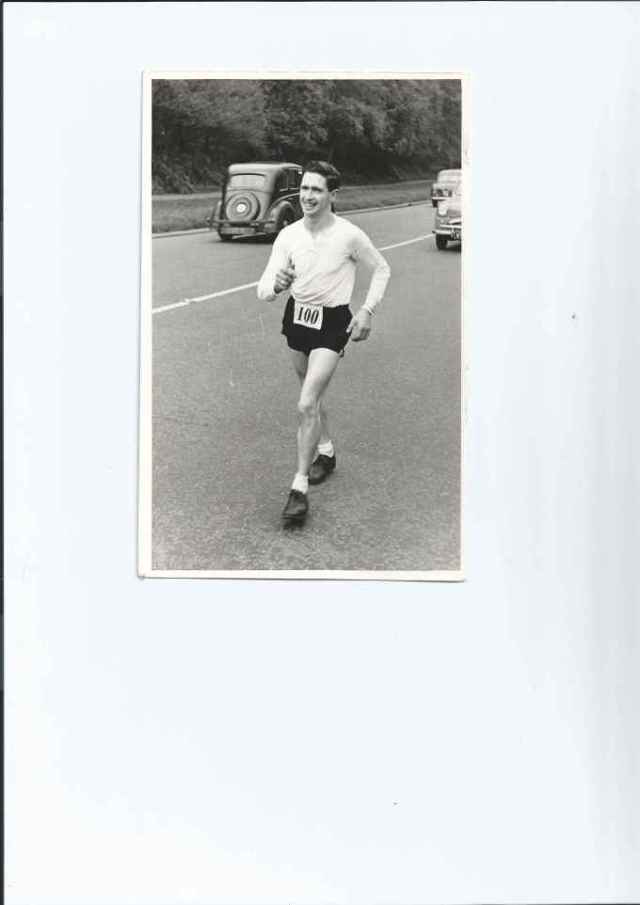 It was heartening to hear that there was a good turnout for Vic Murray’s funeral with Eric Horwill attending as President of the Centurions. Quiet and unassuming he was a much loved member of the club, always willing to help out, whatever the task.

Fred Pearce, who supplied the evocative photo of Vic racing over 60 years ago, recalls that
his Dad, Fred Pearce Senior and Vic finished together in the London-Brighton and Back in 1955 when they became Centurions No 255 and 256 with a time of 22hrs 29mins 50secs.

Chris Bolton was very close to Vic. Indeed Chris remembers Vic as his mentor, the reason he both joined Lancashire Walking Club and became a Centurion. This is the story Chris penned for the Centurions web site.

In May 1957 I went to Blackpool to watch the finish of the Manchester to Blackpool relay race. This was an eleven man relay featuring the best running clubs from the Midlands and North of England.

It was there that I met Vic Murray who told me that each year he walked Manchester to Blackpool, a distance of 51.75 miles. I couldn’t believe anyone could walk that far; he then told me that he had walked 100 miles within 24 hours and was Centurion No. 256. At that moment ambition was born and I knew that I wanted to be a Centurion.

Four weeks later, aged eighteen and with no training or preparation I stood on the start line at 6-15 am to walk from Manchester to Blackpool. With only the confidence and ignorance of youth I kept with Vic for forty miles. At that point I decided to retire and a message was sent for a car to pick me up. After sitting at the side of the road for forty minutes I realised that the message must have gone astray and as one of last walkers passed (Billy Watson C146) I decided to join him and finish the race. In the end I finished in 11 hours and 3 minutes, just behind Billy but in last place.

Well that certainly wasn’t an auspicious start but I was hooked. Five years later I finished the Manchester to Blackpool Walk in fourth position and led Lancashire Walking Club to the Team Title. Seven days later I qualified as a Centurion, finishing together with Brian Howarth and Paddy Dowling, and I would be forever grateful for the chance meeting with Vic Murray.

On crossing the finishing line I was the youngest Centurion at that moment, not the youngest ever. However 48 minutes later Davey Moncrieff of Sheffield crossed the line and he was three months younger than I was so that distinction didn’t last long.

Vic will be sadly missed and I cherish many happy memories of him.

He had a wry sense of humour. I remember him telling me one day that Marie was suspicious of him clearing off every Saturday (it wasn’t true of course) and that he had to show her his blisters to prove what he’d been doing. As he said “its a good job I didn’t tell her I went horse riding”.

For my part I won’t be able to approach the turn in Heaton Park on the Simister course without remembering Vic’s welcoming encouragement and the time he chided me gently for claiming the cone was in the wrong place!