When Fred Pearce suggested holding a 2 Hour track walk to commemorate Ron Wallwork’s UK and Commonwealth record set in 1971 there were a few raised eyebrows.  Why forty five years on, couldn’t we wait till fifty? Never mind that 2 hours lapping a track wasn’t everybody’s cup of tea. However the more we thunk upon, the more sense it made. 2016 marked also the fiftieth anniversary of Ron’s momentous victory in the inaugural Commonwealth Games 20 miles. 2016 is the year of Fred’s well-deserved reign as the RWA National President. And a few cheeky characters hinted that the motley crew from 1971 weren’t getting any younger. Best get it done on September 10th then.

Hence,  blessed with a pleasant summer’s day, we descended on the sheltered Bury track, barely a discus throw from the famous market. You could almost smell the black puddings,  which may or may not have inspired a magnificent turnout. 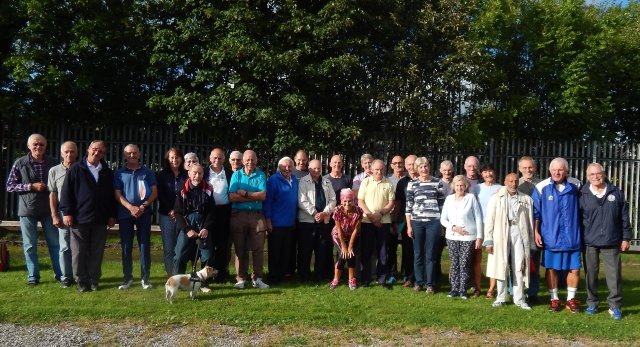 Such was the hugging and kissing, the mistaken identities, the banter and buzz of nostalgia it’s a wonder the race ever started at all. However Fred, as ever keeping his head, whilst others pissed about, brought to us our senses. Numbers were collected and a few dedicated souls warmed up. Sean Pender lay down on the track and ventured impressively a few stretching exercises. He had come all the way from Enfield.

Of those, who had raced in 1971, let it be public knowledge that Ron, Dave Vickers and Eric Crompton assured me that they were just doing a couple of laps for appearances’ sake. Mick Entwistle was clear that racing 5,000 metres as fast as he could was his target, whilst Julian Hopkins, the proud owner of two hip replacements, decided to settle back into his role as influential coach and technical adviser. With this in mind  I decided to race up to 10,000 metres and see how I felt. And so to the off. My shame was yet to come. 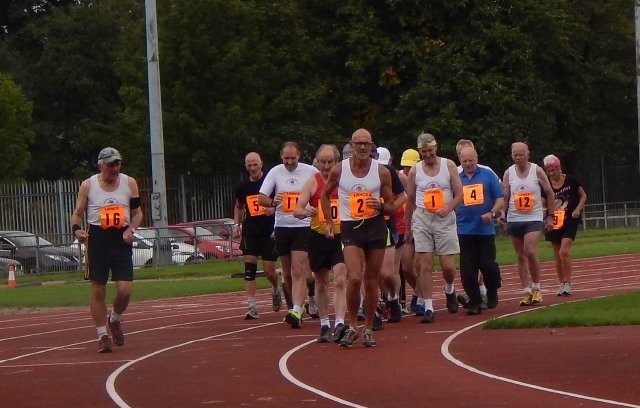 To cut the embarrassment short I tried to pretend I’d done 10k after 24 laps, only to be corrected by a battery of high-ranking officials, managed another and called it a day. I’ll spare the reader the excuses. Pat Evans and Guy Goodair settled for 10k, whilst Mick, Irene Pike and new recruit, Ian Vaughan completed the 5k. Meanwhile everyone else gutted it out with Roy Gunnett, earning Julian’s praise for his straight legs if not his backward lean, holding off Sean [a few more exercises?] second, with John Crahan [a bit less ale?] third. Ron, Dave and Eric defied age and arthritis to finish the two hours, once more out-psyching me. 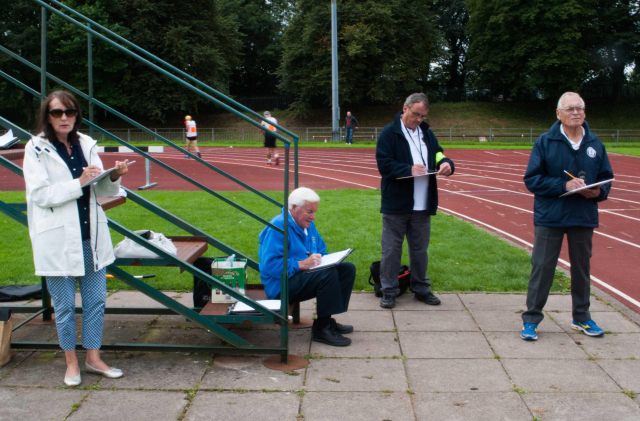 As well as the officials, the great, the good and attractive, pictured above, Dave Evans was also recording, whilst Glyn Jones and Ian Hilditch managed the back straight water and sponges. As ever without this support the race would not have taken place. A word for the spectators is also not amiss. Joan Wallwork and June Vickers rolled back the years, observing the efforts of their respective husbands with a mixture of pride and dismay. After all the lads had claimed they were only doing a lap or two, so why the bloody-mindedness insistence on finishing the two hours?!

Roy receives the R.Smith Trophy from Ron. In his early years Dick Smith was Ron’s coach.

In his speech at the prize-giving Ron paid tribute to everyone, who had contributed to a wonderful day and had a special word for those, who had been there in 1971, singling out some of their successes. The following based on a bit of follow up research fills out his remarks.

Julian Hopkins, is famously or infamously, remembered as a National Coach way ahead of his time, hounded out of the sport for observing that contact was increasingly impossible as the event developed. In his time he featured on the cover of Race Walking Record, July 1967, as a rising star, having finished 10th counter in the National 20k, won by Ron Wallwork, enabling a second place for the club. In 1970 he was integral to the team that placed first, second and third in the four senior championships, alongside Wallwork and Taylor, ensuring that the club won the A.D. McSweeney trophy as the leading club of the year, ahead of 29 teams – with four walkers to count in all championships. The other counters in that notable year were Dave Vickers [10 miles], Chris Eyre [20k[, Don Warren [20 miles] and Mick Entwistle [50k]

Eric Crompton was a tenacious competitor, excelling in the endurance events. He remained loyal to the Leyland Athletic Club, child of the Leyland Motors Club, the offspring of that post-war tradition, whereby major employers within manufacturing put some of their profits into leisure facilities for their workers. In doing so he probably deprived himself of a medal or two with Lancashire WC. I need to do some more work to track down Eric’s best performances –  around 4 hours 40 minutes for 50k? I’ve a decade of Race Walking Records missing.

As Ron pointed out,  Mick Entwistle made an enormous contribution to the club’s historic success in 1969/1970. He had finished as third counter in the team that finished second in the opening National Junior 5 won by Brian Adams [Leicester WC]. Chris Eyre was 6th in 39:15, Steve Crow 9th in 39:55 with Mick 10th in the same time. Ten months later we went into the final and vital 50k championship with the bare bones of a team, leave aside only just making the start. Ron remained an inspiration, but Tony and Julian were not famed for their long-distance exploits  and Mick was a debutant. In the end Ron finished 3rd in 4:25:16, putting his Commonwealth Games disappointment behind him, Tony and Julian dragged themselves to 17th and 20th respectively in 4:56:33 and 5:01:12 with Mick, 39th in 5:15:43, out on his feet, but making sure we took third spot to clinch the title of top club in the land, ahead of rivals, Leicester and Belgrave. Conditions were warm and humid, 107 started, but only 72 finished. In October Mick showed another glimpse of his potential finishing 5th in the National Junior in 39:06 in a race won by Olly Flynn [Basildon] in 37:05 in front of Mick Holmes [Yorks WC] 37:24 and our very own Tony Malone, 3rd in 38:02, Backed up by a disappointed Steve Crow, 15th in 41:00 we won the team race by one point from Steyning.

As for our Fred Pearce, who never lived up to his potential as a walker because of the pressures of his business career, those of us gathered together in Bury once more agreed  unanimously that he was, indeed is, the Team manager par excellence. Classically Fred’s painstaking record of the 1971 2 Hour race itself illustrates his attention to the finest detail.

At some point I must organise an interview with Ron to trace his remarkable career, which began in 1958 on the lanes of Sutton Macclesfield. At this point I want to reflect simply that such was his remarkable consistency the year 1970 saw him finish 2nd in the National 10 miles, 20km and 20 miles, all behind West German international, Wilf Wesch, and 3rd in the above-mentioned 50km.

As for myself, I must have put the poor performance in the 1971 2 Hours race behind me as I was selected later in the year to walk for Great Britain in the 20km against West Germany on the back of a 3rd place in an Enfield Invitation event, clocking 93:52 behind winner, Paul Nihill, 92:26 and Steve Gower, 93:35. I think this is the only occasion when the club had two members racing for GB in the same race as Ron and I competed in the 20km.

Missing from the above photo are Dave Vickers and Guy Goodair. Dave, a Lancashire County steeple-chaser, took up our sport in 1968, whilst injured, having bumped into Ron at Leverhulme Park, Bolton United Harriers’ headquarters. That very year he burst dramatically onto the scene, winning the prestigious Dick Hudson’s race in 69:24, hauling in Roy Thorpe [Wakefield] and Mal Tolley [Sheffield] on the steep finish. In the end this was probably Dave’s finest hour. Despite other good performances in the early 70’s his progress was thwarted by recurring and debilitating shin soreness and he returned to the running fraternity. As for Guy, now a leading Masters orienteer, it is difficult to know where to start in reflecting on an amazing career in the colours of Wakefield, dominated by his performances at the longer distances. In particular he seemed to be an ever-present at our club’s blue riband event, the Manchester-Blackpool. I think his first appearance was in 1961, when he finished 6th in under nine hours amongst a band of ‘ultra’ greats, Frank O’Reilly [Lozells Harriers], Hughie Neilson [Woodford Green]and Karl Abolins [Royal Sutton Coldfield], to name a few, although the event itself was won in 8:25:24 by John Edgington [Coventry Godiva], who represented GB at 20 kilometres. It was a race notable for a victory in the team race for Lancashire led home by Charlie Colman, 3rd, John Todd 4th, Jack Sankey 15th and Chris Bolton 19th. In 1964 Guy won the Blackpool in a time of 8:16:54, only 47 seconds short of the record at that time. Just the week before he had illustrated his good form , placing 6th in the National 50km in 4:30:57. I wonder if Guy has kept a record of the miles he has raced across the years. Phenomenal. Another interview beckons, given he is an adopted son.

Enough is enough and I hope I’ve not tried the patience of the reader. Let me apologise to anyone I’ve left out of the credits – oh, many thanks to Linda McDermot and Ian Vaughan for the smashing photos, not to forget Pat and Flo for the refreshments – and to say Bury is a very welcoming venue with great facilities. I’ll leave the last word to a lovely bloke, outstanding captain and athlete.