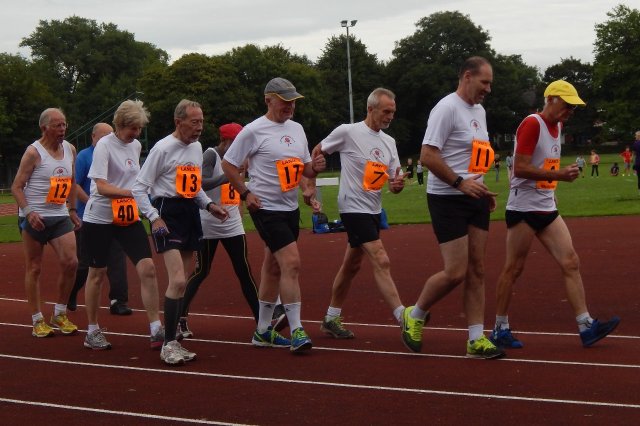 There was a good turnout for the race of 18 walkers – these included 2 guest walkers (Glyn Jones from the Midlands and Dan Maskell from Brighton). Weather conditions were cold and sunny. The scratch race was won by Greg Smith closely followed in second and third by the two Crahan brothers Peter and John.The winner of a tightly contested handicap race was Irene Pike. 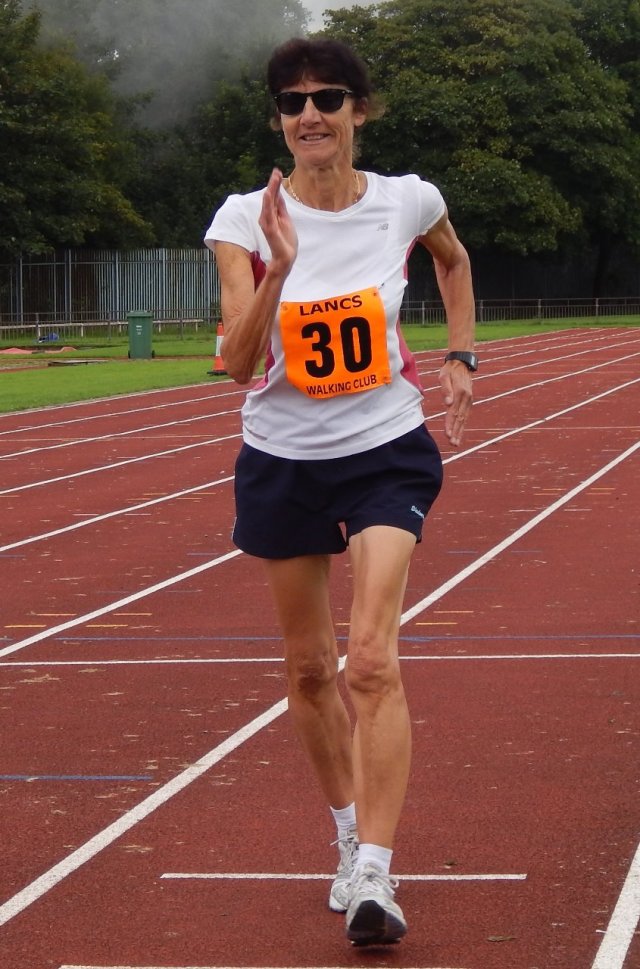 Linda in full flow at Bury – Ta to Linda again

Might, I add – Great piece of handicapping by Dave Evans – barely 39 seconds between the first and sixth.

Further information from Fred on the day:

With regards to the race………Dave Evans & myself did the timekeeping and recorded, Chris Bolton turned everybody round in the Park ( replacing the much missed Vic Murray’s  position ), Adrian Edwards ( recently qualified) judged/ marshalled . Incidentally, I stood with Adrian for 2 periods as the walkers passed for his observations / comments etc …..
A new guy Dave Connor ( lives in Knowsley) turned up out of the blue to race. He is in his early 40s and is a Triathlete. Performed well ( obviously very fit) and I feel would be good if we can hold onto him and develop his technique. Dave gave him tuition prior to the race and I tried to help him during the race and afterwards….watch this space.

The 109th Lancashire Walking Club AGM was held following the race, chaired and presented, to everyone’s pleasure, by Fred Pearce, back at the helm following his absence from the last couple of races due to health problems. As usual the club’s Secret Santa presided over the giving of presents and the munching of mince pies, all accompanied by festive music.

The AGM agenda was full to the brim, but Fred’s firm chairing meant that the business was completed by 4.45. Evidently he left a touch knackered, but satisfied with events. Since the day has Fred has distributed a range of material to keep everyone up-to-date. Hence I’ll post here no more than the names of the recipients of the club’s 2016 Awards.

Winner of the A J Taylor Award for the best performance of the season : Roy Gunnett

Winner of the Cliff Royle Salver for the best long distance performance of the season: Adrian Edwards