I couldn’t resist asking John if I could pull together into a single post his almost unbelievable memory of his victory in the 1966 Blackpool, previously covered in Guy Goodair’s reminiscences. 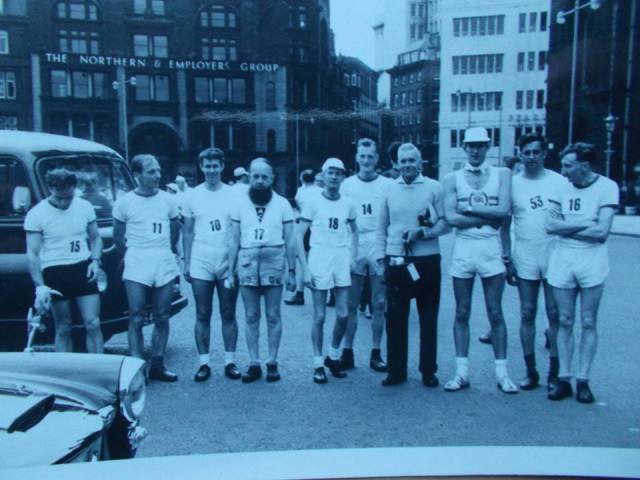 The Royal Sutton Coldfield team at the start, all in black leather shoes apart from John.

Fascinating to read Guy Goodair’s account of the 1966 Manchester to Blackpool. I remember it well! It was my first 50 miles and I had no idea what to do. Royal Sutton had persuaded me to enter even though my maximum training distance was 9 miles. Why I agreed to walk I will never know. I will leave my memories of this event another day. It was an epic from start to finish!

Well, here it is! Stayed at the YMCA and was woken very early by walkers getting ready. Did not have breakfast -Too early! Just a cup of black coffee and went to the start with my back-up team of Arthur Wilkins and his son, Andy. Soon we were away and I found myself in the lead. Went through 7 miles in around 57 minutes and was well in front. Arrived at the drink station at Bolton but it was not open – Probably earlier than expected. Now needed the loo! Fortunately, there was one of those downstairs ones in the middle of the road in Bolton so I went down to relieve myself. Found out later they did it down their legs and did not stop. Anyway, coming up from the bowels of the earth I met the leading group who I walked with for around 10 minutes before taking off on my own again.

I did begin to wonder where the back-up team was because I had not seen them at all. So, on I went on my own through half-way and then Chorley. By now I was feeling none too good as I had not had a drink since the cup of coffee at the start. I remember a time check at 50k which was 4 hours 30 something but still no drinks. Where on earth was my attendant? Then I saw Dick Kerr’s works and a bus full of women on a day out to going to Blackpool. They were parked in a lay-by. I got onto the bus and begged a drink. All they had was beer so I had a pint bottle of Guinness which I drank immediately and then took another opened with me. I now felt much worse than before and my legs began to buckle. After the bottles of Guinness and considerably further down the road, I managed to buy a large bottle of pop at a shop near a time check and was told I was 2 miles in front of the second walker. I made the pop last as long as possible and just walked slowly on towards Blackpool. 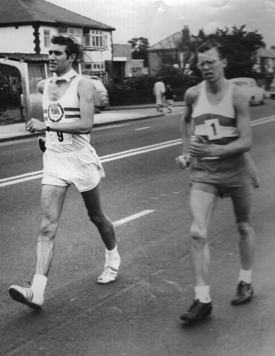 I had been told that the windmill was 7 miles from the finish and when I got there I found my attendant who had come in a taxi to tell me the car broke down at the start. They gave me a drink and a Woodbine so I sat down and enjoyed both. All of a sudden, one of them shouted, ‘Get up John there is a walker coming’. Of course, you all know, it was Guy Goodair who had easily made up the two mile deficit. It was not long before I was caught but had the idea that I must try to hang on which I did until we arrived at Blackpool Promenade to be subjected to all of the ribald comments from drunks enjoying a bit of fun. The last mile was hard but I remember pulling away from Guy as I was faster over a short distance. Finally, the finish was there and the hot bath welcome.

I have no idea why I agreed to do this race and did not return for another 15 years – The memory was so horrific! The next attempt was also a win but I got lost several times on the way but that is another story.