As a way of kicking myself up the posterior and because it’s a smashing piece of writing, which deserves an audience beyond Facebook, here is Trevor McDermot’s report on last weekend’s 100 miles on the Isle of Man. One excuse in terms of a Lancashire connection is that Manx walkers always raced in the colours of Lancashire in Inter-Counties events.Plus a special mention for Martin Fisher, who often supports our club races. Can you believe, he completed a record 29th 100 miles inside the 24 hours? Huge respect. 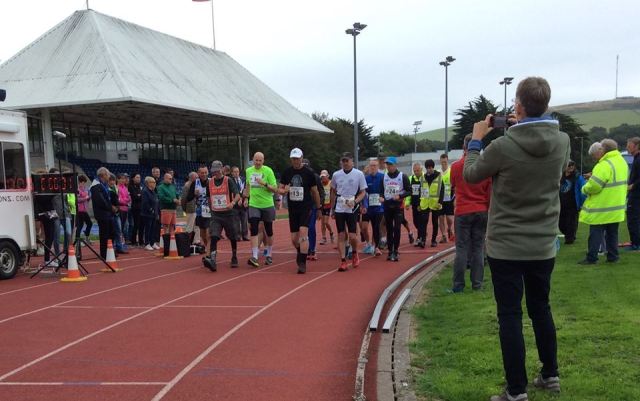 And they’re off , but not off the ground

The demonstration of guts and determination from the competitors last weekend was an honour to witness.

All One Hundred Mile events are occasions, way more than just mere races, and suitably for this a Civic Reception had taken place the night before in Douglas Town Hall, where top notch speeches from the Mayor and Eric Horwill framed the stage more than adequately for the various players to play their parts.

Conditions at noon the following day were blustery if not quite damp following the summer’s heatwave. Officials bustled about on official business, tents, gazebos were erected and the usual acquaintances re-made along the sidelines. Staff at the NSC were most helpful, opening gates where required and finding facilities and rooms for us to use.

The belatedly arrival of Chris Maddocks and family (after travel problems) meant that we had expert commentary for voluble Dot to hand over to.

An eerie and silent twilight occurred during Saturday evening when the flags completely stopped fluttering, and lulled as if to gather strength for the violence that was about to hit. A mist crept in and nestled itself snugly in and around the stadium, while under half-floodlights the ever-circling walkers began to feel the strain of their labours.

Then ‘KC’ aka Karen Chiarello flashed through 100km in 11.48 (just think about that, rather impressive a mid-race split for a W50, non ?) . . . almost signalling that Storm Ernesto could now arrive.

What followed was a torrent of almost biblical proportions for six hours, when due to drainage problems on the NSC track the Referees were seriously considering using the 2nd lane. The walkers continued regardless and there was no longer any need for sponging.

Only two retired during that spell – Erin Taylor-Talcott, well known 50km pioneer, had stopped with hypothermia and valiantly tried to continue, along with popular Frans Leitjens, meanwhile John Constandinou saw out the worst of it carrying an umbrella (although the rain was bouncing harder off the surface) before finally stopping at 300 laps in 18 hours.

Have seen Dave Talcott in action before but not moving as well as this, muscling his way through a speedy final 10km, before the welcoming Sunday morning bacon sarnies arrived. I was also impressed by the courage of Paul Jansen (who had led from Richard Gerrard in the early stages) on and the no fuss, quiet attitude of Annic Deman who made 402 laps of a track look as much trouble as an average school run on a weekday morning.

Frank van der Gulik is simply built for long distance walking, here he ticked off another hundred and then casually warmed down with another 20 laps. The Centurion achievement of diabetic Dale Farquhar, with tears of joy from stressed-out Jayne, was worth the entrance fee alone and gave us immense personal delight. Martin Fisher was never in doubt of yet another great performance, we weren’t worried about him at all and neither was Judith.

As for Sandra Brown, who carries her own tea cup (with postcode attached in event of loss). Mere words could never do her justice. The little, ever smiling lady with the massive career numbers . . . she simply arrives, competes and leaves us all stunned once again.

I’ve raised this question before but do we in the walking fraternity – and by that I mean Everybody in Race Walking – kind of, you know and how can I put this . . . take her for granted ?

When you consider that this was her seventh ‘hundred’ in 2018 alone , and she is now approaching her 70th birthday, then it becomes obvious that some kind of official recognition by general press media, UKA, England Athletics, the RWA and anybody else is seriously overdue.

We are fortunate to have been around when she graced the sport.

The evening presentation at Manx Yacht Club was a lovely, warm occasion with race DVD’s handed out to all. And a mention here for the Belgian quintet who had entered, started, finished their Hundreds and then attended all wearing matching centurion shirts.

Massive respect to Graham Young, Martin and Manx Centurions for what they achieved with this event.

To the man whose idea it all was, whose personal contribution may be unmatched by anyone, anywhere, for a (mere) walking race – Mr. Mark Byrne – we are vastly indebted for having the experience.

Ta to Linda McDermot for the photos